I turned and there was Franco Harris just behind me on the sidelines, thoroughly enthused and grinning like the Cheshire Cat after Krystal Cozzo jumped a little sideline route and took the INT to the house for the first score of the game, to put the Passion up 7-0.

As of January, 2011, Franco is part-owner of the Pittsburgh Passion and a long-time supporter of the team. And, I think we can safely say, an expert on football. This being Pittsburgh and all, it's like having a rock star on the sidelines. At halftime, Franco remained on the field and had security open the gate, so that the kids who wanted to meet him could hang out on the sidelines with him for a bit. (Frankly, I think the parents were just as excited, if not more so, to get the chance to meet Franco and get a picture of him.) The guy is good with kids. He was like the Pied Piper out there, talking to the kids, signing anything that people thrust at him, posing for picture after picture. It was good stuff. 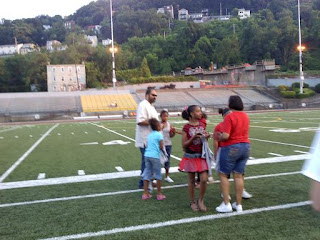 Back to the game. Even though the Passion had smoked the Cleveland Fusion earlier in the season, by a score of 26-8, I thought this might be a real test for them. The Fusion seemed to have improved (they hung up 76 points on the Pittsburgh Force last week) and the playoffs were on the line for the Passion. Also, though the Fusion doesn't have the offensive firepower of some other teams, they do have Lisa Horton at quarterback and she is, for my money, the best, most complete quarterback I've seen in the women's game (more on that later.) So, anything can happen, I figured.

I thought, I really thought that the 2007 Passion had the best defense I might ever see on a women's football team.

As with so many things, I was wrong. Enter the 2011 Passion defense -- a unit that put on a clinic in terms of rising up in big occasions, forcing the issue, and imposing their will on another team.

Most of the players, I know from earlier teams. A few have been there since the beginning (Beth Amato and JoJo Warner); some were there through the 2007 championship season (Trumane Rogers, Michele Brevard, Sharon Vasquez, Olivia Griswold, and Kim Zubovic), but there are newer additions, lots of them, who are big contributors, too (Cozzo, Jen Hoffman, Stephanie Balochko, Octavia Griswold (Olivia's twin sister), Jen Dulski and Ali McGrath.)

After Kozzo's interception, Horton did what she does best -- she regrouped the Fusion and led them on a long march, dinking and dunking the whole way, perfect little passes into the flat, little bubble screens, and running herself so effectively that when the horn sounded the end of the 1st quarter, Cleveland was perched on the goal-line, having held the ball nearly the entire quarter. Just when it looked like Pittsburgh might be in a little trouble, on a 4th and goal with just about a foot to go, OG (Olivia Griswold) crashed through as Horton rolled left, tackling her for a four yard loss, ending the threat.

Then Kozzo was back to work, recovering a muffed punt return deep in Cleveland territory, which Lyndsi Hughes cashed in a few minutes later with a nifty eight yard touchdown run to make it 14-0. And the romp was on. Pittsburgh ran a variation of a play that they used to call "Cleveland," back in championship season, with the QB lined up in the slot, rolling into the backfield to take the pitch, then going deep. Used to be they ran it with Horton on the trigger, but this time it was AJ Haeg (in her first year at QB), hitting rookie wide out Rachel Wodjowksi for the touchdown.

The defense did some serious damage, on the scoreboard, but also in the trenches. Horton dropped back in the pocket. As she cocked her arm up to her ear to release the ball, she was sandwiched by OG and Amato. It was a long time before Horton got up and made her way to the sidelines, handing the offense over to Danisha Garrison at quarterback.

At the start of the 3rd quarter, Tru Rogers picked off a Garrison pass over the middle and took that in for a touchdown to make it 28-0. And they weren't done scoring yet. A bit later, Garrison dropped back to pass and McGrath blew through her block, was just about to drag the Fusion QB down, when, inexplicably, she just tossed the ball up in the air. Not to put too fine a point on it -- but it was an extremely bad decision. Amato had come crashing through on her side and was right there, the ball just popped into her hands. She was off, running wild, like a little kid who has just discovered the joy of running hard and fast, blond ponytail bouncing behind her, shoulder pads bouncing up and down. It was a scene of pure joy in the endzone as Amato's teammates swarmed her in celebration. It may not be the biggest touchdown of her career or the most important, but I have to wonder if it wasn't the most fun.

Lisa Horton led the Passion through so many seasons, some good, some not so good and one that was perfect. After 2009, she retired and last fall, she coached the quarterbacks at Coolidge High School (in D.C.) It seemed like her playing career was over and her coaching career just beginning, but life circumstances called Horton back to Cleveland, where she grew up and, you know, football is in her blood, so she finds herself wearing the orange and brown of the Cleveland Fusion these days. She's a tough competitor and gamely came back to play the 4th quarter (with broken ribs or a cracked sternum or bruised sternum, she wasn't sure which), but it didn't matter for the Fusion. This was the Passion's night and, to be specific, it was the Passion defense's night. They were not to be denied. 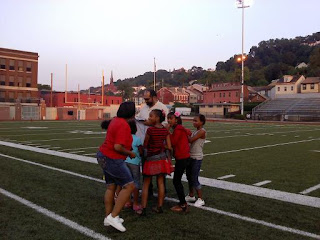 When I don't spend time on the sidelines of Passion games, there are things I miss, little moments -- Sharon Vasquez choking down pickle juice to fight off leg cramps, listening to linebacker Jen Dulski take a good-natured ribbing after her single snap at fullback (a 2 yard gain), having Janice Masters breakdown Cleveland's offensive tendencies in live action, waiting for the blazing hot sun to drop below the western lip of Cupples Stadium and just enjoying the constant banter of the players. I've said it before and I'll say it again -- it's good to be back at Cupples.
Posted by JODY DIPERNA at 11:55 AM