Taking a Hard Look at the Loss of Aaron Smith 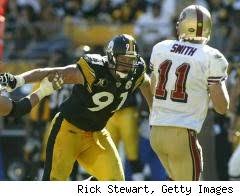 If you were making an instructional video of tackling form, you would be wise to chose as your subject Aaron Smith. He does it so effortlessly that one barely notices, yet he is picture perfect every single time: line him up, wrap him up, take him down. His technique is one of the reasons that he is the best run stopping defensive lineman in the league -- not the best run-stopper on the Steelers, mind you, but the best run-stopper in the NFL. No question.

And if you likewise want to know why defensive players so frequently launch themselves, missile-like, to try to tackle by hitting with their shoulder-pads rather than using their arms and wrapping up? Just stroll through Aaron Smith's injuries in the last five years:

Steelers fans know how valuable Smith is. It takes a lot of elements to make a great team. You need contributions from all over the place, from the gunner on kickoff returns to the starting defensive end, and the feature running back. But if I can be so simple minded as to point out won-loss records, other than Troy, there may not be a more valuable guy on the team. You can make an argument for Pig Ben, too. 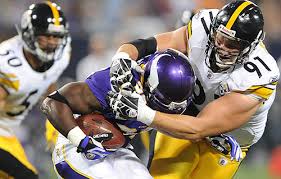 The Steelers go as their defense goes and Dick LeBeau's unit's primary task, every game, every year, is to stop the run. Smith is the biggest reason that opposing teams simply cannot run against the Steelers. He disrupts his entire side of the line and forces running backs to either pop way outside, where the outside contain gets them, or cut back inside, where the inside contain gets them. Or run towards him, where he gets them. It's a no win to try to run anywhere near Smith. 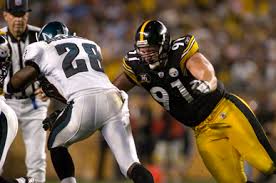 But, you say, the NFL is a passing league now! Stopping the run is as old fashioned as the Wing T or the flying wedge. Let's take a look at what the Steelers are up against to (1) get to the playoffs, and (2) who they might face if they get there.

They have to play the Browns and the Ravens (on the road), the Bungles twice, the Saints, the Jets, the Raiders, the Patriots and the Bills. [They also have to play Carolina, but you know, amazingly, I'm just not worried about that game. Dead Coach Walking.]

Of the remaining teams on their schedule, the Ravens, Raiders, Jets and Browns have rushing attacks in the top half of the league statistically and in fact, the Raiders and Jets have the first and fifth most rushing yards, respectively. I'm not sure there is a tougher back to bring down than Baltimore's Ray Rice; I think that New Years game against Browns and Peyton Hillis will be a bitch; and despite their lower ranking, the Bengals Cedric Benson runs like a mack truck.

The point is, they have to face some really good running teams. Really good.

Then, there's the possibility of the playoffs where they might have to face: the Jets, the Patriots, the Ravens, the Titans, the Colts, the Raiders or the Chiefs. (Hey, somebody has to win the AFC West and it ain't gonna be the Norv Turners.) Those teams all have great running attacks, less Indy and New England. But then, of course, you have to deal with Manning the Greater or Justin Beiber. Pick your poison.

I don't think the loss of Aaron Smith can be overestimated and now I will echo the sentiments of so many others out there.

Starting this week, Ziggy Hood can prove he was worth that first round pick. Coach Tomlin and Kevin Colbert didn't draft Hood so that he could just 'spell' Smith from time to time; they drafted him to eventually replace the best run stopper in the league. The Steelers chances of making the playoffs and making noise in the playoffs now rest squarely on the shoulders of one Evander 'Ziggy' Hood. Go get 'em, Tiger.