If the playoffs started this weekend, the Steelers would be the No. 1 seed in the AFC. Those Steelers? My Steelers? Sure. But the Steelers, despite their 6-2 record, and despite their handling of the New England Patriots on Sunday at Heinz Field, feel like an incomplete team, a less than great team, don't they? And I think that feeling at the back of your mind which is causing your skepticism is turnover differential.

The Steelers are -10. Yes, that's minus ten. It's the worst turnover differential in the AFC and, in fact, it's the worst in the entire NFL. By way of comparison, teams with comparable records, the Detroit Lions (6-2) and the Buffalo Bills (5-2) are +13 and +9, respectively. I started to wonder if any team had secured the overall 1 seed for the playoffs with a worse turnover differential than this version of the Pittsburgh Steelers.

Of all 36 of those teams (four teams in each of nine years, for those too lazy to do math), only one had a negative turnover differential -- the 2006 New Orleans Saints (the No. 2 seed that year) had a -2 turnover differential. (Which is bad, but not nearly so heinous as these Steelers.) One out of 36 -- that's a 2.77% occurrence, y'all.

So, what does this mean for your Pixburgh Stillers?

Either it's a fluke. Or the Steelers are doomed going forward.

As to the offensive end of the equation, Pig Ben & Co. have coughed up the ball 13 times through eight games. That's bad stinky, no doubt, but it's right around middle of the pack in the AFC.

Beyond which, turnovers are just part of the game. You can't win with four and five and six turnovers in a game, but to turn the ball over once? Maybe twice? That's just another day at the office for pass-happy NFL offenses in the 21st century. These are not the old Neil O'Donnell-Bill Cowher-Blitzburg  Steelers. This group is offensively explosive. They can score in bunches and they can score fast. They can overcome a turnover, maybe two, depending on the timing of it.

Add to the offensive side of the ledger sheet, SEVEN of those turnovers came in one game -- versus the Baltimore Ravens to open the season. In the subsequent seven games, they've turned the ball over six times, less than one turnover per game. That is certainly a percentage with which playoff teams can live and work around. If the offense can continue to hang on to the ball they way they have (thanks in large part to vastly improved play from Pig Ben), they're in good shape going forward. 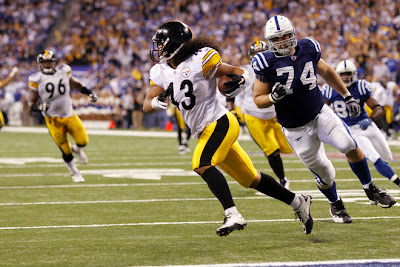 Sigh. Here's the real problem -- the Steelers defense has forced just three turnovers in eight games, or about one-third of a turnover per game. That's worst in the NFL. By a long shot. Hell, that's just downright embarrassing.

I don't think that teams can count on a crazy turnover swing. Last year's Patriots were the AFC's No. 1 seed with a +28 turnover differential. +28? That's pretty incredible and so high that it's just off the charts. By way of comparison, most AFC playoff teams in my sample years were anywhere from +2 to +18. In short, I'm not sure that a team can count on that extreme of a turnover differential, like +28, but being solidly +10 puts you in good shape for the playoff hunt.

The Steelers have a lot of ground to make up if they even want to be +1. I believe, in order to (a) make the playoffs and (b) advance in the playoffs, they simply have to find a way to create turnovers. They have to be averaging at least one (or more than that) takeaway per game. It's just that simple.

They need to force fumbles. They need to pressure the QB and force ints. Though the DB's don't have great hands (I forgive you, Ike, because you're such a good cover man), Ryan Clark, Troy, William Gay and Keenan Lewis have to start ball-hawking. They need some strip sacks -- which are the gold standard of turnovers, to my mind.

Get coach Tomlin some splash plays.

The offense is now doing their share. It's time for the defense to step up, because even though they've been winning without turnovers, I don't think they can keep doing that throughout the season.
Posted by JODY DIPERNA at 12:47 PM