With the Atlanta Thrashers at long last becoming the Winnipeg Jets, there is sensible, necessary talk of re-aligning the NHL. Currently, Winnipeg occupies Atlanta's former spot in the Southeast Division of the Eastern Conference. Look at a map. If the Columbus Blue Jackets and Detroit Red Wings are Western teams, then so, by god, is Winnipeg. Re-alignment is clearly necessary, just for geographic sanity.

Per the Post-Gazette this morning, the below four division re-alignment has been proposed: 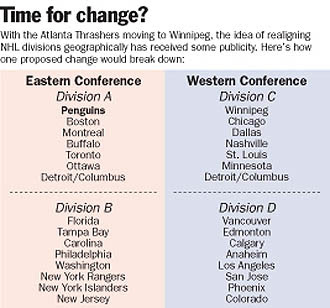 That is simply asinine.
Just a wee bit of moving, and you have some much more sane alignments, keeping the East and West, each with three five-team divisions. Here's what I propose:
EASTERN CONFERENCE: 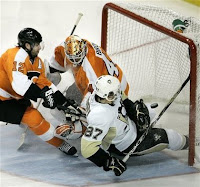 To say the Flyers and Penguins hate each other is an understatement. To say that everybody hates the Devils is also an understatement. This makes geographic sense. Also, these are traditionally working class fan bases. Think of this as the Blue Collar Division. It fits for so many reasons. 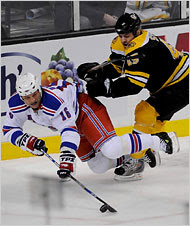 Again, there is great antipathy between the Bruins and the Rangers, and the Bruins and the Canadiens, between the Leafs and the Canadiens. And, you put four of the original six in one division. They've been hating on each other for ages. They've been hating on each other since Teddy Roosevelt was rough-riding. Every arena for every single inter-divisional game will be rocking with blood lust. How fantastic is that?


Southeast Division:
Washington
Florida
Tampa
Carolina
Columbus
Hey, Columbus is in southern Ohio. Also, it's much further east than Winnipeg, so finally Columbus comes to the eastern division. It's not as exciting a division as the first two, but it's not my fault that Columbus, Florida and Carolina pack very little natural buzz. 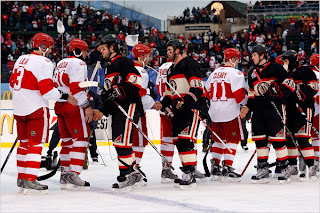 St. Louis
Minnesota
Nashville
You have to keep Detroit and Chicago together. It is a moral imperative. Somehow, Minnesota fits for me with this group -- the Great Lakes Division (except Nashville -- but the Preds had to go somewhere.)

Northwest Division:
Vancouver
Colorado
Calgary
Winnipeg
Edmonton
With four Canadian teams, this might be the most fun division in hockey. I expect riots. Behave yourselves Canucks fans. 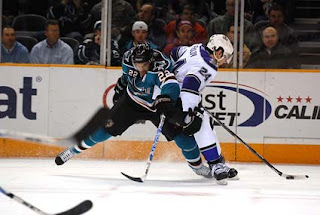 As an eastern conference habitue, I don't have much feeling for these teams. None have a really storied tradition. None are Canadian. But this at least makes geographic sense. If the fans want drama, they'll have to generate it themselves. I do understand that there's some serious enmity between the Kings and the Sharks, so that's a good thing.

There ya go. Simple. Easy. Geographically sane, if not ideal. And it preserves some of the game's best rivalries. Who do you trust? Me? Or this guy? 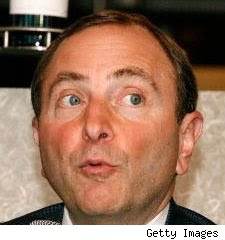 You're welcome, NHL.
Posted by JODY DIPERNA at 6:45 AM