On Malki-Mania, Winning without Sidney Crosby and the Demise of the Washington Capitals

D'ya think Lightning net-minder Dwayne Roloson is the kind of guy who would, while on safari, poke a hungry lion with a pointy stick? Or who, despite warnings from his local, friendly apiarist, shake up a hive of honey bees while wearing nothing but shorts, flip-flops and a t-shirt? Based on his performance in Pittsburgh yesterday, I think he is just that sort of guy.

I would give this simple piece of advice to the dear Mr. Roloson:  do not poke the Russian Bear in the face like this: 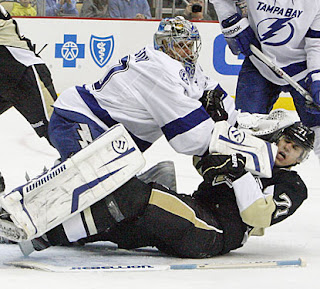 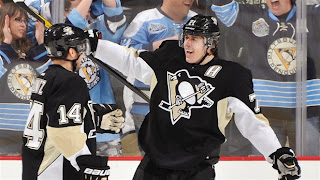 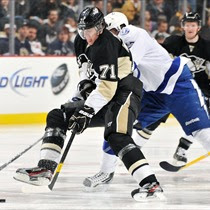 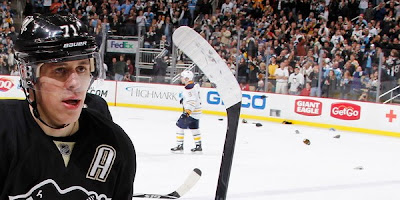 All of which set the already hyper-frenzied Malki-Mania into a state of delirium frenetic enough to rival that of a gaggle of cheerleaders hopped up on vanity and Red Bull.

Evgeni Malkin, known affectionately as "Geno" to his teammates (and all Pittsburgh fans), has been the wild bull in the china shop this season and I say that in the nicest way possible. As good as he is on a regular day, he can elevate his level of play in a fit of pique. In short, Roloson's dissed the great Russian, who was having not one bit of that -- hence the spectacular hat-trick. And the sly grins directed to Roloson after each of his three goals.

Yesterday's bravura performance makes you wonder what the Penguins might have been able to do in the playoffs last year in Game 7 against the Lightning with a healthy Geno out there. Just saying.

[Sidebar:  NHL coaches generally pull goalies when they're having a bad day, after they've let in four goals or so. The thought is that you don't want to embarrass your net-minder. Also, sometimes if you make a switch, the reliever might keep your team within striking distance. After Geno's first goal and with his team down 5-0, that would have been an obvious time to go to the bullpen, but Tampa coach Guy Boucher left Roloson in there, twisting in the wind through the final, bitter moments of the game. I think he did it because he felt that Roloson had it coming. Giving Geno the two-handed face-wash was unnecessary and idiotic; and moreover, Roloson brought that eight goal beat-down on himself -- it was earned. I tend to agree with Boucher's thinking here.] 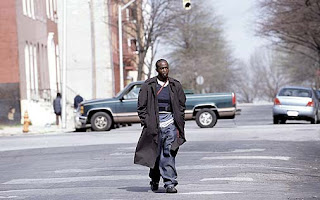 But back to the greatness of Malkin. We have long known that Evgeni Malkin is a freak of nature, a hockey playing savant. For goalies, very few things must be as terrifying as seeing Geno barrelling towards you on a break-away. To me, Geno in open ice, eyes on the goal is as frightening a site as Omar Little trolling the streets of West Baltimore with a shotgun under his coat. "Geno Comin'! Geno Comin'!"

That said, I think that I underestimated his leadership abilities. Last year, I wrote that the Penguins were as dependent on Sidney Crosby's character as they were on his ability to score goals. And I still think that Crosby is one of the best leaders in the NHL, but I was wrong that a leadership void existed in his absence. Geno is a different kind of leader, but he is a leader -- the leader -- on the 2011-2012 Pittsburgh Penguins.

There are plenty of guys who lead by example on the Penguins squad (Brooks Orpik leaps to mind), but Malkin drives the machine. He is capable of amazing feats, of passing the puck to himself, of putting pucks into the net from impossible angles, of physically wearing down the opposition. Turns out that he is equally capable of setting a tone for the rest of the team, of galvanizing his line-mates, of inspiring the entire team to great heights. He is tougher and more resilient I previously recognized.

Back in the spring of 2009, when the Penguins were marching toward a date with Lord Stanley's Cup, I felt like Malkin was almost cowed by the force of personality of another Russian player, one Alexander Mikhaylovich Ovechkin. He sort of disappeared in the seven game series against the Caps. He's Russian and Ovie's Russian, so the comparisons are just right there for the taking, no?

After that series, all Malkin did was electrify hockey fans, putting on a show against the Carolina Hurricanes and then in the finals against the Red Wings, earning himself a Conn Smythe award in the process. For those of us lucky enough to watch him on a nightly basis, we have watched him grow as a player every season, every week, every game, every shift in the intervening years.

All of which leads me to the mess in our nation's capital. And no, I'm not talking about Congress. I'm talking about that mess involving a hockey team and that player who used to strike fear in net-minders. Dating back to at least the late 1980's, Tony Kornheiser has dubbed the Caps 'choking dogs.' And that they have been. In the Ovechkin era, they have been loaded with talent, certainly enough talent to have made it to a Cup final or, at the very least, an Eastern Conference final.

They are a franchise desperate to win something, anything. In the off-season, they went and got Tomas Vokoun, last seen watching an astonishing number of pucks find their way into net behind him during his tenure with the Florida Panthers. It was a move that reeked of desperation to me, particularly as I thought Semyon Varlamov was straight up a better goalie anyway. 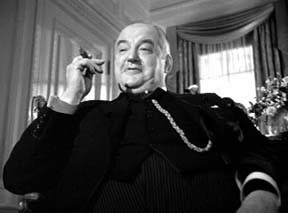 You can point to injuries as the problem with the Capitals. Defenseman Mike Green has missed much of the season due to injury, playing in only 15 games. I think Green's a bit over-rated, but still, that's a big loss for them. To me, the bigger loss for the Capitals has been winger Nicklas Backstrom, out since January 4th with a concussion. Several expert puckheads argue that Backstrom is the team's best player, not Ovechkin. The results seem to back this up:  as of January 4, 2012, the Caps were 21-17 with Backstrom on the ice and, as of that day, they were also in the seven spot in the conference standings (below.) 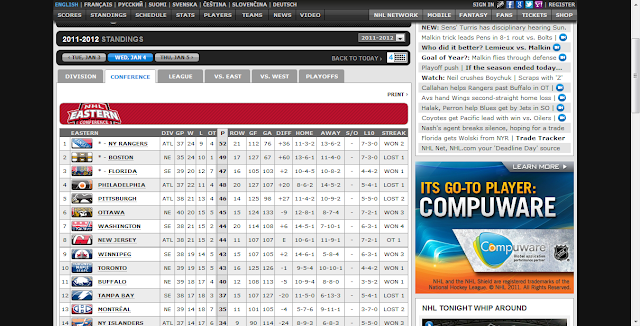 Now, the Caps are in ninth place in the eastern conference, a point behind the Winnipeg Jets and may very possibly miss the playoffs altogether.

That team is mentally soft. They can't finish. And they crumble easily. Perhaps that is the fault of the coach. You might could lay the blame for that at the feet of guys like Brooks Laich and Mike Knuble, who perhaps should forcibly grab the mantle of leadership and imbue their teammates with some mental and spiritual fortitude.

But at the end of the day, Ovie wears the captain's "C". He has clamored for attention, has show-boated and taken runs at guys and preened for the cameras. He has made himself the leader of the team. And while Evgeni Malkin has spent the last three to four years not only honing his game, but becoming a tougher and more mentally tough player, Ovie's been skating in place.

In the interest of full disclosure, I have to admit that watching Ovechkin and his Capitals crash and burn is about as much fun as a girl can have. But the reasons for their collapse -- what seems to me to be a real lack of resilience -- makes it even more fun.
Posted by JODY DIPERNA at 1:29 PM